What I’m trying to do: Trying to make a custom component

I was trying to select forms as template from anvil designer. so I had defined a property like this:

Which produced this result. (printing the properties dictionary in form init):

Then I deleted the defined properties from designer like this:

What’s strange is, after deleting the properties, when i print I still get the same result:

1. Why these values are still passed as properties to init?
2. How do i make it go away?

Any help is appreciated

8> not just pasted on one form. it also ends up sometimes in all open forms. 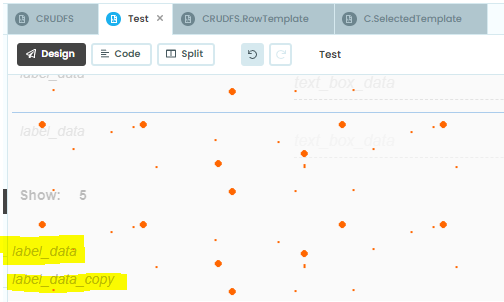 9> Last but not least, blinking cursor gets stuck on multiple places on the editor.

Various aspects of New Beta Editor is growing on me, Don’t wanna switch back to classic editor. At the same time these issues irritates a lot. Quite a dilemma!

Anyone facing such weird things?

My feeling is that you are describing 3 bugs and they all should be addressed. Here are my thoughts.

hi @rsmahmud, re the ghost properties for form do those properties still appear in the component dialogue when you open them?
Same question about the properties view once you’ve added it to a Form?

We’ll also change that default value! It should really be None if you haven’t selected a form.

You can try switching to the beta editor and configuring the custom component there to see if that gets rid of the ghost properties.

(I tried to reproduce the ghost properties but I wasn’t able to).

hi @stucork
Those ghost properties does not appear in the component dialogue or in properties view ( right panel toolbox in design view).

Switching back and forth to classic editor does not seem to get rid of said ghosts.

@rsmahmud - Thanks for reporting this - I’ve managed to reproduce.
The bug seems to occur when you have a custom component already added to a form somewhere in your app.
When you remove properties from the custom component dialogue, these properties aren’t cleaned up properly.

edit - if you find the rogue component in the design view. Change one of its properties. This should force a clean up.