Nice feature. One wee inconvenience: all imported components do show up in the toolbox, making the custom list quite long. Especially since icon, full name and source are shown, often taking one line per component. Would be nice if we could add the following to a custom component: Icon to show. Defaults to the generic icon. Text to show. Defaults to whatever it is now. Suppress text. Text will still be shown when hovering over the icon. Also the source is now printed behind the name, in a …

They did not went very sneaky this time

Hi all, You may have heard rumblings of something big underway. Well, it’s time to let the cat out of the bag: Today we’re launching the brand new Beta Editor! We’ve taken everything we’ve learned from working with developers like you, and rebuilt the Anvil Editor from the ground up to better support what you’re doing. It’s got a fresh new look and feel, so it’s easier to find what you need: [light-mode] (docs) Powerful collaboration with branch/merge version control: [image] (docs) …

The new editor has adjustable width app browser! So many features! 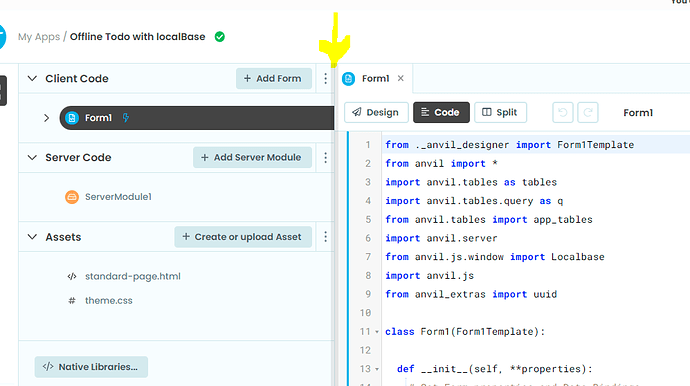 In Beta, the tabs names are shortened automatically. Love it

I cloned the app, added a folder with some tests that I run on my computer using the uplink to interact with the database and other services, pushed and… it’s there!

The new editor has a much more refined way to work with branches in the git repository than the old editor.

Here is an use case that was not the reason why it has been designed as it was, but you can do it and it just saved me some time and helped me not playing with fire. Hence I think it qualifies as a sneaky new feature.

I was working on the dev branch, modifying many forms and modules and didn’t want to merge to prod because I would have very likely broken the production app.

I also did a little and safe change to an http endpoint. The new endpoint was compatible with the production app, but was in dev, so I couldn’t test it because it was called by another application that I didn’t want to modify.

I am not sure when this changed but I now see that errors in data bindings have a link in the output panel that takes you to the component with the error. I am sure it never used to be like this but definitely a nice little feature

New icons have been added to the component ‘icon’ property. I suppose they upgraded their font awesome version.

When an event binding is registered to a component but the function doesn’t exist, there is now a nice output in the serial monitor telling you what failed. Has helped tremendously with some overdue code cleanup

The little star icon next to your app will pin the app so that it always remains at the top of your list.

Not sure if anyone has seen this - the Beta IDE checks the app and the database schema to see if there are any mismatches! It even helps you rectify what is not correct!! Nice additional Anvil Team 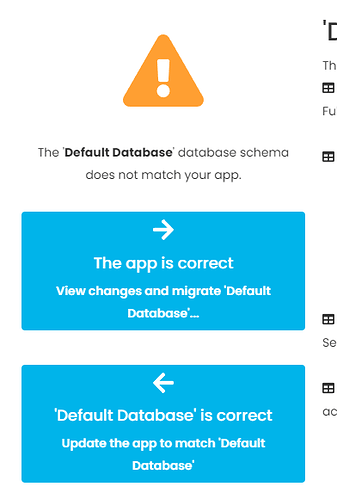 For anyone that missed this (like myself):
Excel import to data tables … the Docs now document this with code examples

Importing data from CSV and Excel Anvil apps have a full Python instance server-side, which makes it simple to import data from CSVs and Excel files into your Data Tables. There are two ways to do this: Using a FileLoader Component in a running...

I just noticed a few UI changes to the Anvil forum. How long has it been like that?

Not sure when it changed but the IDE seems to be a lot smoother - no more text delays when typing. Nice work and Thank you Anvil Team

Also - I cannot overstate how cool the Beta IDE is!!

Not sure when it changed but the IDE seems to be a lot smoother - no more text delays when typing.

Everytime I see those delays I open the Chrome Task Manager and the Anvil tab is consuming 1GB+ of memory. Stopping the process and THEN reloading usually works for me and for a lot of time until it happens again.

It seems that the IDE is saving a lot faster! I used to have to wait for the spinner next to the app name for a couple of seconds before I run the debug, but it seems to save almost instantaneously now

You may or may not have noticed that the App Logs now have a how lot more functionality including search by session, filter by device and skipping to timeframes (at the bottom). 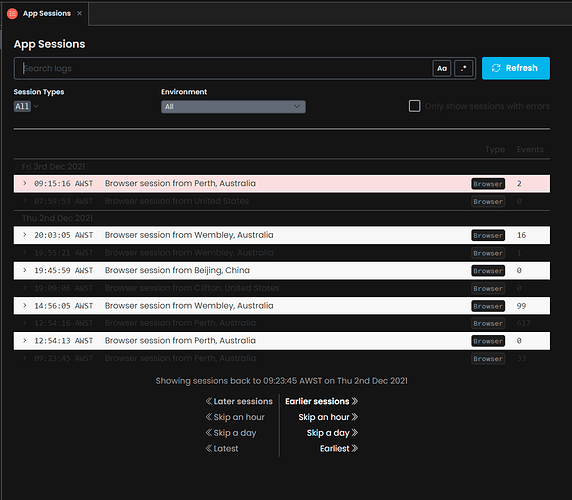 Each log session in the App Sessions window has a View sessions button that allows to keep a session open in its own tab.

Then using Alt + PgUp and Alt + PgDn it is possible to quickly compare them:

I see that data table exports to csv now names the file with the date and table it was imported from rather than just ‘export’. This makes a lot more sense.