Setting up an environment for testing modules locally

I always clone my apps and test the modules locally. Unfortunately sometimes the process is not smooth and I can have the following problems:

A local test environment is easy to get to work, but I got it wrong so many times that I decided to come here and write down the steps required to:

At this point running the app from dev will show an alert saying it’s running from dev, running it from master will say from master.

I use type hinting on client modules. In the IDE it’s ignored. It doesn’t help, but doesn’t bother either. But it helps when developing locally, so I use it.

The problem is that type hinting doesn’t bother Skulpt, but the imports do.
The solution is to not import when running on the client.
This will import the typing classes when working locally with PyCharm but will not bother the browser:

Always make sure the “Send server calls from other environments to this Uplink” is unchecked. There may be cases where you want to run server functions on your uplink, but when that checkbox is checked, ALL the server functions defined in any running uplink ALWAYS run in the uplink.

This means that your production apps will pick uplink functions being tested and modified while the tests are connected and pick their own functions when all the uplinks have disconnected.

I had a few days hitting the head in the wall trying to figure out why an app was working for some users and not for other users, and for me was working only intermittently.

It is possible to debug HTTP endpoints by:

Careful: by checking the “Send server calls from other environments to this Uplink”, you are executing all the HTTP endpoints on your testing environment, even the production ones.

Imagine that I have the following folder hierarchy:

Where, in relation to client_code and server_code, would be a good, practical place to put folder Tests? (E.g., to make the import statements in Tests\*.py work cleanly.)

This is how what I see in PyCharm with the app I’m working on now, following the suggestions from Ian: 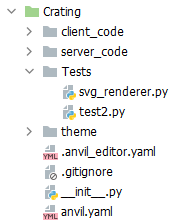 And this is how I import some modules:

The imports are different because I only have access to SQL from the server, not from uplink and because… it works.

This helps immensely! Thank you, @stefano.menci !

following the suggestions from Ian:

That is the first place I checked, but it didn’t say where to put Tests…

Do you also create a __init__.py for client_code and server_code?

Code in my tests folder has trouble finding modules from those locations.

No, I don’t create a __init__.py for client_code and server_code.

Until yesterday I used two strategies:

The problem is that, once I get my local environment working, PyCharm does its best to figure out what’s going on, but sometimes it just fails to find the correct references. The problems are even bigger when I have dependencies and start tagging folders on other repositories as source folders. And the problems increase when some apps and some modules have the same name.

Right now I’m in the process of setting up the test environment for a little app that I have almost finished without doing any tests (yeah I know, not really test driven, but this is 50% UI, 50% dependencies and the remaining 0.0something% the new app itself). The dependencies don’t play nicely with each other, so I need to setup a test environment on my PC. Unfortunately (or rather luckily) I just got a new PC. I just installed Python, hopefully I will be ready to start working on the tests tomorrow.

Before the old PC gave up, I had just learned that the reason why the tests folder has trouble finding the modules is what Anvil does with the __init.py__:

The folder structure is flattened, so it’s easier to import from both server_code and client_code, but PyCharm doesn’t like it.

and I got the tests to run, but I don’t like to mess with automatically generated code. And I don’t like it because PyCharm doesn’t understand it.

So, as soon as I have the new PC ready, I will try to figure out what is the best way to get the tests folder to import everything from both the current app and the dependencies, in the cleanest way possible, so PyCharm and type hinting will work without problems.

I will let you know if I figure out a pattern that makes sense to tell you about.

Thanks, Stefano. Likewise, I will post here if I find a way.

The pytest books I’ve seen so far all assume that you’re testing an installable package, and have, in fact, actually installed it, in editable mode.

Neither of which apply to Anvil apps, of course. Perhaps there’s a pytest plugin that will help. If not, it might be easy enough to write one.

Edit: Just getting started with pytest. Maybe a pytest fixture? Or config setting?

Thanks @p.colbert and @stefano.menci , if you do find a way to flatten the directories please post here! I gave up and now I use in my server code:

It’s a little annoying.
BTW for my simple apps I use pytest to test client_code and server_code with pyDALAnvilWorks