So our Core Application is getting fairly large. To give you a hint VS CodeCount results below. 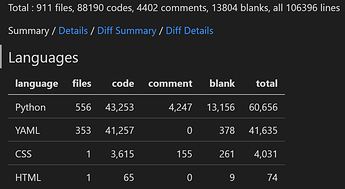 First, for all Anvil doubters, this is running in production for 100 paying customers and anvil is very much capable of handling that.

But still we face some issues as our code base keeps growing.
First - the editor is getting very slow which makes the dev experience not as fun as it could be.
Second - the inital load time is around 8 seconds (only 1 roundtrip to check the user) 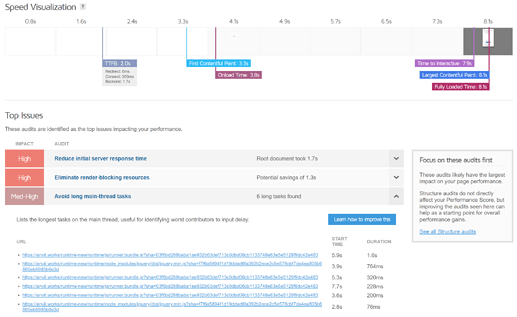 Monorepository vs Microservices
While the initial load time is for sure reducable and the editor will hopefully become more powerfull over time, we are thinking of splitting our codebase up.

I’m curious how you approach larger anvil apps, especially when there are a few developer. Do you build several smaller applications or keep it in a monorepository?

I like the monorepo approach since it makes developing, versioning, staging and testing much easier. Since we would otherwise have about 10 smaller applications which all get frequently updated, have qa, beta, prod environments and get released in 3 week cycles.

Whats your take on that? What where your experiences?

But still we face some issues as our code base keeps growing.
First - the editor is getting very slow which makes the dev experience not as fun as it could be.
Second - the inital load time is around 8 seconds (only 1 roundtrip to check the user)

Hi @mark.breuss, it’s great that you could have 100s paying customer. At one point, my app has about 200 and it was working fine as well.

When one file has about 2K line of codes, the editor becomes unusable in my case, so I just put code into several files, and the issue is fixed.

As for the loading time, there are many techniques in the forum to speeding it up, but admittedly it varies from case to case. Upgrading your current plan to the next one also somehow solves the performance issue as well, but a bit expensive.

I would stick with the monorepo since it is what Anvil is designed for, once you go to the microservice, there are a lot of unexpected issues. I tried, and failed, so good luck then.

I don’t have experience with Microservices but I maintain a large Anvil App as well so hopefully, these suggestions might help.

These tips should give you a good decrease in speed.

Also, in case you want to go the other way, this might give you some ideas - Server Side Routing Attempt

I investigated your app and noticed your theme.css and code in Native Libraries aren’t really minified. Minifying them can increase the loading by a slight margin.

Amoni has a shiny new command that will do this for you - and the default starting point is the anvil material design theme.

The short version:
I have 100+ apps sharing code via 10+ dependencies.

The long version:
@divyeshlakhotia made a great summary about performance improvement.

I have 100+ small apps, all sharing the same tables, all depending on the same set of small dependency apps.

When I create a new app, I clone it to my computer, replace its theme folder with the theme folder of an app called Standard Theme and push. At this point the new app looks like all the other apps.

Then I add a dependency for each behavior it needs to share with other apps.

For example, most apps need user authentication, so I add the Users service, share the Users table from other apps (need to temporarily switch to the old editor for this), add the dependency to the custom component HeaderWithLogin, drag the custom component on the header of the main form and I can use self.header_with_login_1.user_permissions() and other methods for the user management.

Another example is the KeyValueCache, a dependency that I use to store key/value pairs with an expiration date and with other policies. I use it in 20% of my apps, and when I used it, I need to share the KeyValue table.

I used to have one large dependency called CommonComponents, but it was difficult to maintain and it was forcing every little app to have all the services and tables even if it didn’t use them. I also had a few scary moments when I made a little change that broke dozens of apps. So I have split it in 10+ little dependency apps, each doing its job.

I wish each module of Anvil Extras was available as its own smaller dependency: I don’t like to load 20 modules when I need only 3. But the workaround is easy: make your own stripped down version of Anvil Extras by removing the parts you don’t use (I did it for a short period, but depending on the official Anvil Extras is easier and I am lazy).

The bad part of this approach is that I can’t test all in one shot (but, seriously, who tests all

?). One day I might take the amoni road and setup a big test environment for all my apps (but I don’t see that day coming any time soon).

The good part is that I have no performance problems and I can focus on the job of each app without risking to break anything.

Another advantage is that most apps start as a proof of concept prototype, then they quickly become production apps.

EDIT
Immediately after posting this I noticed the announcement about the self-service package installation… here is another reason to use many small apps: you may need to use different environments on each app

Regarding startup speed - I’ll try out the suggestions above and report back what worked for us!

In the case for Monorepo vs Dependencies I’ll stick with the monorepo for now mainly - for the simplicity in managing different versions etc. And until hopefully this request Depend on a specific Branch of a Dependency is implemented.

Thanks all and a great weekend to you!