I need to count votes for a list of candidates. For that I need to fetch values from a column in a table into a set, and for each list item count the occurrences.

I have tried appending but data tables seemingly can add one value at a time.
Code Sample:

app_tables.votes.get is designed to only get a single row. If multiple rows match (e.g. more than one row for a school code) then you want app_tables.votes.search instead.

For a search, you won’t be appending to an existing list, you’ll want to use a Python list comprehension to process the elements out of the search results, e.g. something like:

I wonder if Counter would help…

Thanks, this helped a lot.
Anyway, I’m stuck now at the declaring the candidates list and not really arriving at how to count the items within.

but this caused the error below

To switch things up I started receiving:

directly from form. Apparently the return object is of different type after some recent edits

I receive
NameError: name 'Counter' is not defined
for
candidates = Counter()

Thanks, this helped.
Now, I’m figuring out how to flatten the votes, pass them into the counter, and let it do its job.

I don’t use Counter much, but I think you can pass a list to it when you create the instance, so maybe something like this would work? Depends on what’s coming back from your data tables:

Meanwhile, even if candidates remained a list I keep running into 2 issues:

This creates a variable named counter, and assigns an empty Counter as its value. But after that, counter goes unused, so it isn’t going to affect anything.

If you want it to actually do something with your data, you’ll need to put it to use, via its member functions. For examples, see the documentation link I gave earlier.

It looks like your row[cast_vote_step] is a simple object column with a set inside it. So what you end up with is a list of sets. You’d need to further process each set to pull out individual votes.

How I would approach this:

If this is in a loop and taking a long time, before the loop put the candidates in a set first:

inside the loop. (Don’t create an “initialization dictionary” and set an inner loop variable to it, it is mutable and will copy/modify your data with each loop iteration.)

edit2: but I do receive TypeError: 'NoneType' object is not iterable

I get a NameError: name 'O' is not defined for

I think its just supposed to be a 0 (the number Zero ) , the interpreter thinks O (The letter ‘O’ ) is a variable that is not definted.

Is ‘Row_Item’ a column in your candidates table? I was just re-mixing your code from above, I did not test it against the clone, sorry. I did test it in IDLE though: 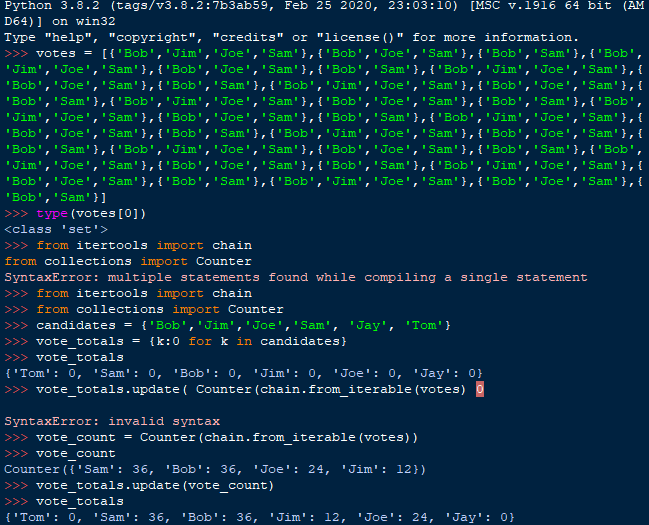 Thanks for sharing! I think the error stems from the votes with None - it is possible for the voter to cast a blank ballot.

To Scrub the None values you could do:

Thank you for all the help. Now, finally I can count votes for all candidates but contrarily to Google Sheets, the Anvil app runs out of browser memory AND times out on server.
I´ll implement a quick workaround because we receive information per school on which constituencies they will vote for, so this information stored in the table can be used to narrow down the number of candidates to count against.
In this round, I´ll also try to put the current ballot votes into global variables and keep table writing on the server side entirely.

To sum up recent changes, I have - switched from storing the long name to storing candidate id - narrowed candidate lists to count votes for to those relevant to the school. With these changes, the counting function now cycles through all columns with stored votes and updates the counter accordingly.
A question remains, relevant to outputting the results.
How do I remove dict items where value = 0?